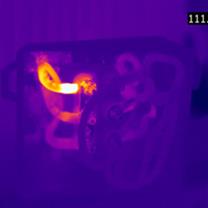 We were requested to conduct a marine thermal imaging survey aboard a Royal Navy vessel which had recently undergone a refit and overhaul. The survey comprised
an electrical survey of the main electrical systems and also a survey of the engine room equipment to identify any surfaces which exceed 220°C to comply
with SOLAS regulations.

The survey was carried out by one of our highly experienced electrical thermal imaging surveyors who boarded the vessel at Portsmouth.

The survey was undertaken while the vessel was conducting sea trials in the English Channel so it was an ideal opportunity to inspect the vast majority of electrical systems and controls on the ship.

In total, 13 electrical faults were identified during the course of the survey, 4 of which were classed as critical.

Several repairs were able to be actioned during the survey itself and follow up inspection proved that the repair was successful. 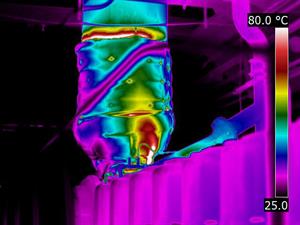 During this inspection the surveyor identified a clear thermal anomaly on the exhaust system on the Port engine. This was highlighted as the suspected source of hot gas which was triggering the fire alarm system.

Further examination of the engine room equipment as planned originally resulted in identification of several areas where surface temperatures exceeded
220°C. SOLAS regulation stipulate this as the maximum allowable surface temperature within vessels as anything over this poses significant risk of fire should a fuel leak or oil leak occur.

Reports for both the electrical survey and engine room survey were issued shortly after returning to dock and the client confirmed that the exhaust leak was indeed the cause of the fire alarm activations.

“Can you pass on our thanks to Mark Pedersen at Pixel Thermographics for not only stepping in at short notice but understanding and accepting the problems
relating to the ship. Their patience whilst the problems continued has been fantastic and the level of service and quality of documentation received
was of a very high standard”