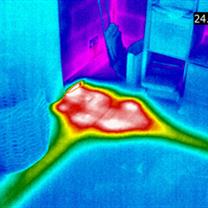 All the flooring within the property had been replaced as part of the project and nobody was willing to start digging unless they were confident of the location of the leak. 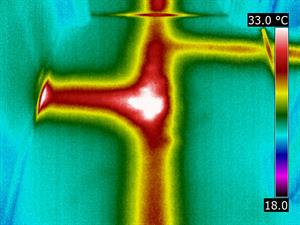 One of our surveyors attended the property to conduct a thermal imaging water leak detection survey and over a period of several hours was able to confirm the exact location of two underfloor pipe leaks.

The first leak was within the concrete under a section of solid wood flooring where it was found that a T piece of the heating system pipework had failed.

The second and larger leak was again within concrete but under a carpeted floor and had failed at a 90° bend.

The client was delighted that both leaks had been found and this saved significant time and money which would have been spent on random excavations in numerous areas.

The leaks were exposed and repaired the same day that the survey took place.

Plumber after exposing the first of 2 leaking pipes